The Ecru Project comprises 112 unpatented contiguous lode mining claims located to the North of the Pipeline-Cortez Hills-Goldrush and Robertson deposit cluster on the famous Cortez/Battle Mountain Trend in Lander County, Nevada. Ecru covers a total area of approximately 9.4km2 and hosts and is prospective for gold mineralisation. The geological framework model for Ecru was developed from historical geophysical surveys and stratigraphic drilling and suggests that Ecru is prospective for Carlin-Type mineralisation. 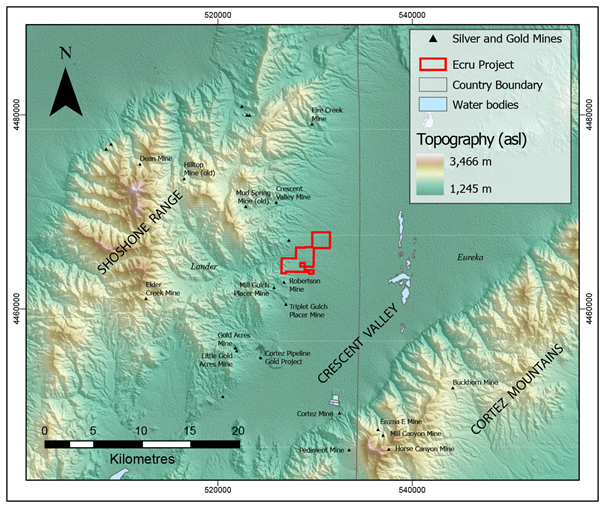 The Ecru Project is centred on 40° 20’ 30” latitude 116° 40’ 10” longitude and is located approximately 90 km southeast of Battle Mountain and about 95 km southwest of Elko. The nearest village (Crescent Valley) is located 8 km to the northeast. The main access is via Highway 80 in the north and Highway 50 in the south. From the south, the Grass Valley Road merges into the Cortez Canyon Road which passes by the eastern boundary of the claims, and links up with Highway 80 in the north. Drilling contractors, heavy-equipment contractors, and field technical personnel to support continued exploration activities are all available from service companies and contractors in Elko. 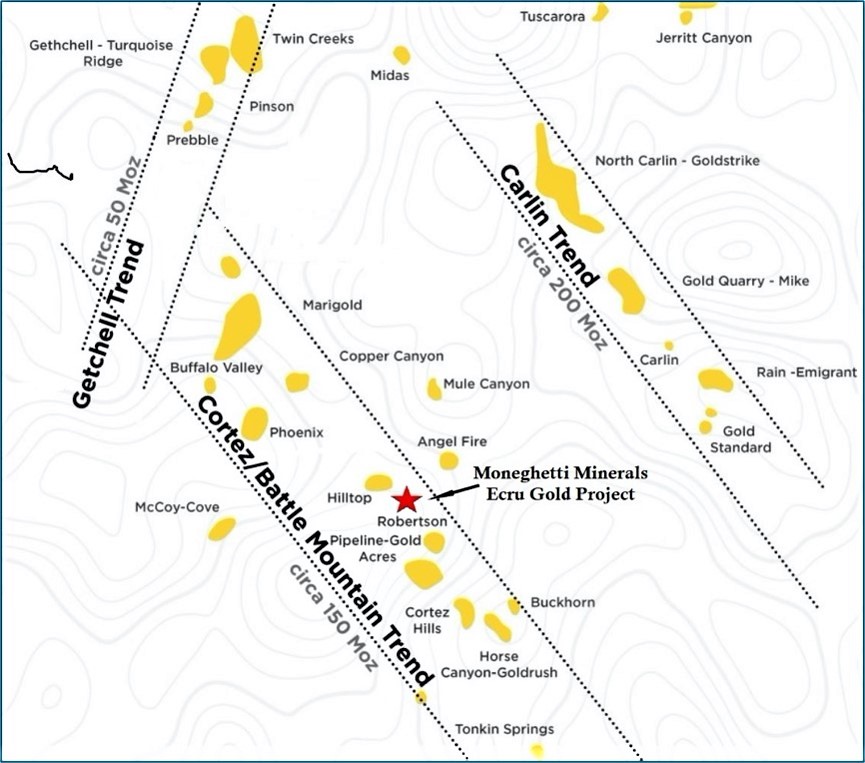 Historical exploration over the Ecru Project claims has been limited, despite its location in well-endowed gold province. The Ecru Project claims were first acquired by Renaissance Exploration Inc (RenEx) in a joint venture with Ivy Minerals Inc in 2014. A detailed gravity survey and enzyme leach soil survey were conducted and integrated with regional public domain datasets to generate targets on the claims. The Ecru Project was optioned to S2 Resources Ltd (S2) in 2017.  After the option agreement was signed, S2 acquired adjacent private lands through a sublease agreement with Newmont Corporation. S2 conducted additional geophysical surveys and drilling in 2018 and 2019.

S2 drilled two stratigraphic holes (NECD0001 and NECD0002) to depths of 575 m and 677 m respectively. The holes were designed to test geophysical signatures of both gravity and audio-magnetotelluric (AMT) high and low anomalies and to measure the thickness of the Upper Plate stratigraphy. Neither NECD0001 or NECD0002 intersected the lower plate and were stopped short of their target depths due to mechanical drilling difficulties.

Several significant gold intersections were encountered in the Upper Plate in drillhole NECD0001. Where significant intersections were encountered, the mineralisation occurred in zones of brecciation, silicification and overprinting argillic alteration within broader haloes of elevated antimony, arsenic, mercury, copper, zinc, molybdenum and tellurium. These multi-element associations show a similar pattern to the Robertson gold deposit (approximately 3Moz) which is located immediately south of Ecru.

The significant intersections from NECD0001 were reported to the ASX by S2 on 14 February 2021. The Company confirms that it is not aware of any new information or data that materially affects the information included in the original market announcement.

Based on the positive results from drillhole NECD0001, S2 acquired detailed magnetic data over the claims area. The results showed a large circular magnetic feature which may be a central intrusion with magnetic alteration haloes in surrounding sediments or may represent four individual magnetic intrusive bodies.

Integration of the geophysical data (magnetics with AMT and gravity) shows that the magnetic high anomalies coincide with gravity lows surrounding a central gravity high. The location of the circular feature also occurs at the same location with the intersection of interpreted north-south and east-northeast-west-southwest trending structures. 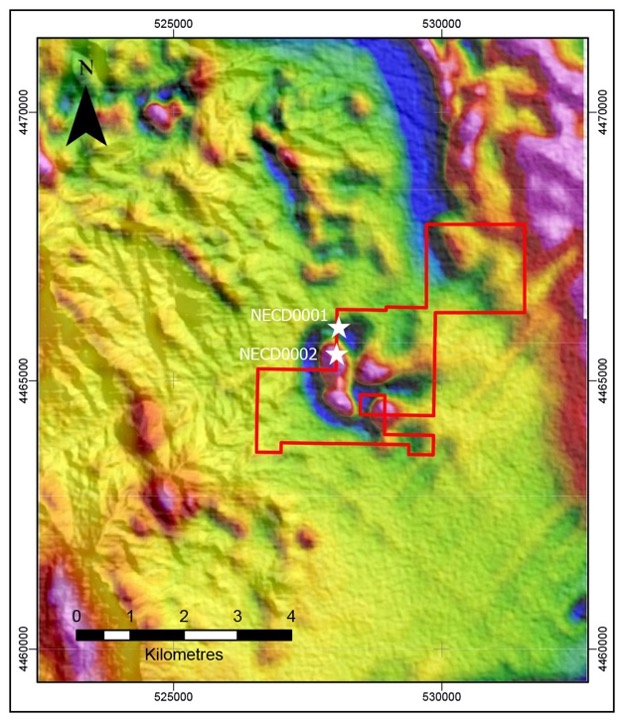 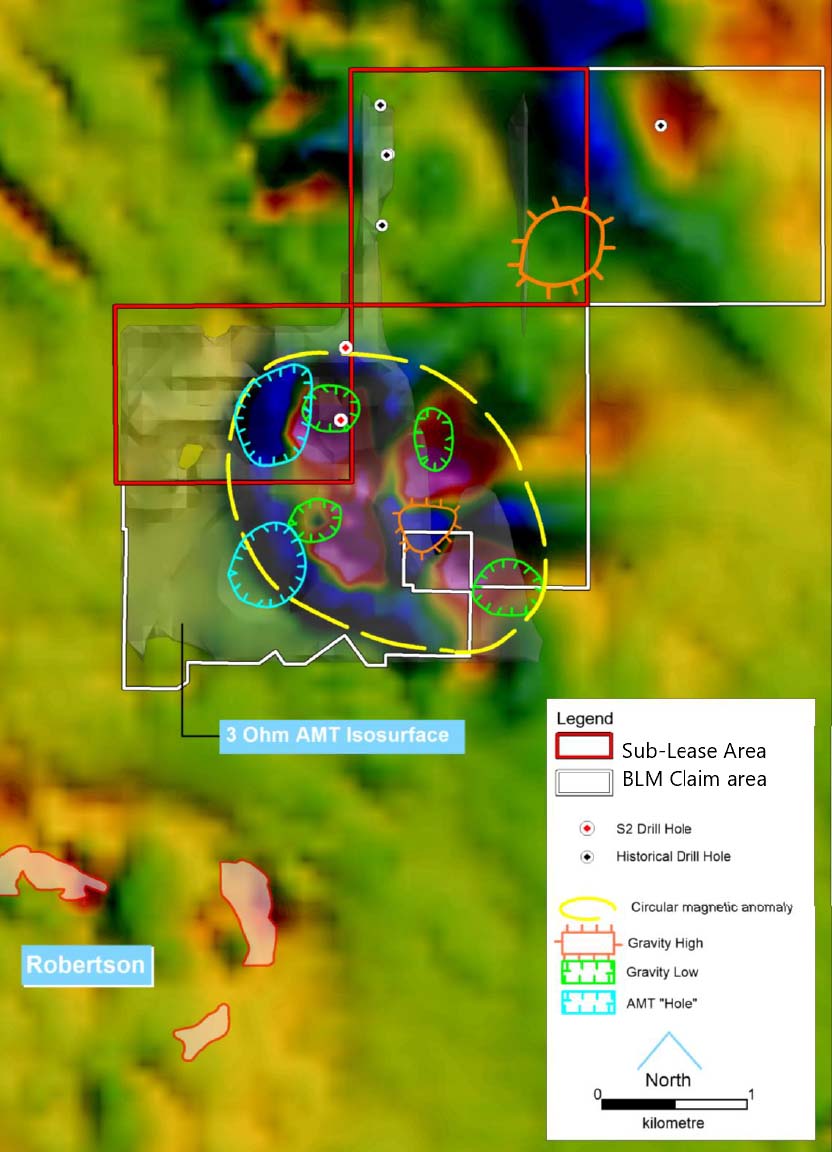 While the main targets are deep within the lower plate stratigraphy possible folding and thrusting has brought up some of these sequences closer to surface which is imaged by the gravity high. This may be due to the relative shallowness of the Lower Plate stratigraphy (carbonate ridge) that has been brought near surface by folding and subsequent exhumation. However, this needs to be tested by stratigraphic drilling to test the occurrence and depth of potential target carbonate sequences.

Where the fault intersects the gravity high, relatively high gold in soils has been detected. 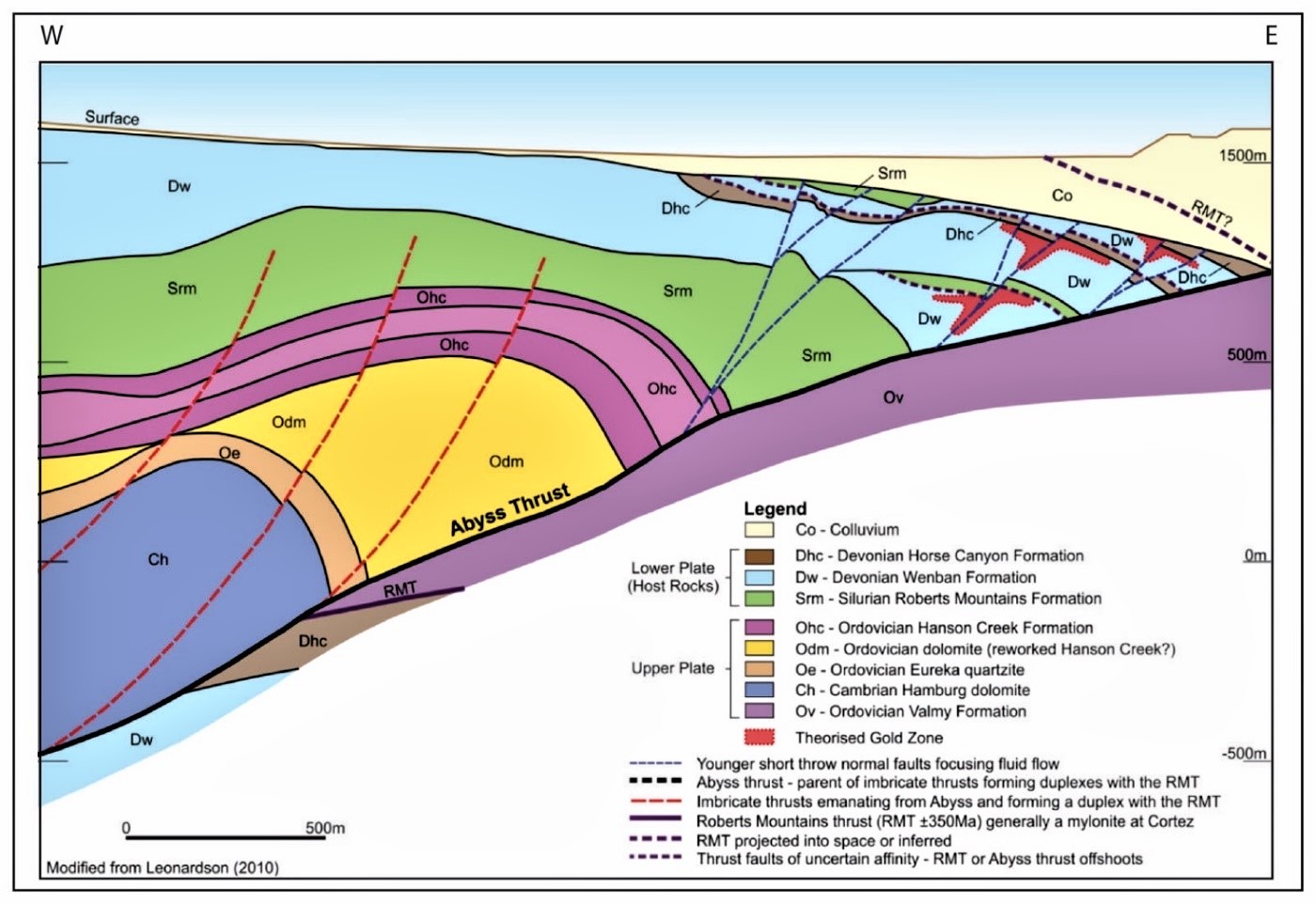