The Bedonia East Project comprises four granted Exploration Licences and one Exploration Licence under application in the Norseman area of Western Australia. It covers a total area of approximately 300km2. Bedonia East is geologically located on the margin between the Yilgarn Craton and the younger Proterozoic rocks of the Albany-Fraser orogeny. The prospective Cunderlee fault traverses the northern section of the project tenure. There is anomalous gold within the regolith profile identified in historical drilling (grades up to 2.7g/t at very shallow depths on the Cleanthes and Leila prospects) and the basement remains untested for orogenic lode gold mineralisation. 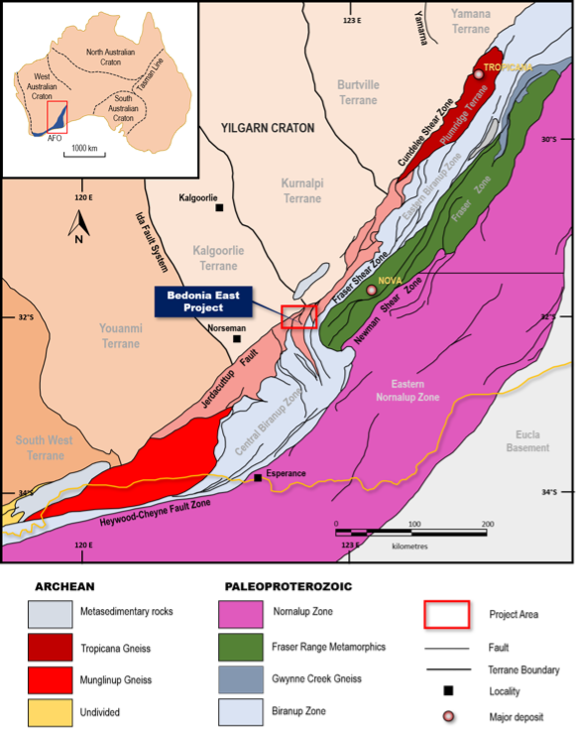 Access to the Project area from Kalgoorlie is via the sealed Kambalda Road to the Coolgardie–Esperance Highway, then on to the Eyre Highway.

The geological setting is within a major structural zone along the southeast margin of the Yilgarn Craton. Large faults associated with craton margins are a favourable location for the formation or world class orebodies such as the Tropicana gold deposit which was discovered in 2005 by Anglo Ashanti and joint venture partner Independence Group NL along the Cundeelee Fault.

The most significant historical exploration was undertaken by Sipa Resources (in joint venture with Newmont Corporation) who carried out extensive geochemical soils followed by Aircore and RAB programs over its historical Woodline project (covering Bedonia East) before surrendering the tenement package in 2014.

Historically, the principal reconnaissance exploration method was to geochemically sample the widespread pedogenic calcrete layer developed at depths of 0.5 to 2m as this had been a successful method in vectoring to the Tropicana discovery. Several gold anomalies/prospects were identified from this reconnaissance geochemical sampling with two prominent gold prospects (Cleanthes and Lila) identified in the area now covered by the Bedonia East Project.

Two anomalous gold trends were interpreted from the drill data. There is a central gold anomaly with further gold anomalism in the north‐west of the Cleanthes 200 x 50 m drilling grid. Anomalous gold was located within the regolith profile of a schistose micro diorite/granitiod basement and is coincident with anomalous Bi-Te-Ag-Cu-W and Mo.  Minor sulphides were observed in the samples with mineralization generally restricted to 1-2-meter intervals. The best gold assay 2.7g/t being found on the western end of a drill line and therefore remains opens.

South of the Cleanthes Prospect, a further 36 RAB holes were drilled along an E-W traverse with no significant intersections.

The Lila Prospect is geologically located on the western side of the Cundeelee fault directly north of Cleanthes. The prospect was first discovered by Goldfields Australasia Pty Ltd in a joint venture with Avoca Resources Ltd (2001-2005) in which soil sampling was carried out over the Lila anomaly followed by thirty (30) air core holes drilled in four traverses over the Prospect. Two samples returned gold assay values above 0.2g/t. ROE1333 intersected 2m at 0.29g/t gold from 34m depth, and ROE1336 intersected 2m at 0.49g/t gold.

Newmont (2006-2009) and later Sipa (2009-2014) explored the area for gold and base metals focusing on calcrete anomalies and structural domains targeting primary mineralisation similar to that which had recently been discovered at Tropicana.

Two later passes of auger sampling were carried out targeting pedogenic calcrete to a depth between 0.5m and 2m. A regional 1km x 200m pattern was completed in 2010. Closer spacing was carried out at Leila in 2011 at 200m x 100m. In total this amounted to 570 samples across the tenure of which the best result was 86ppb gold.

Gold anomalism was found within three zones within the regolith that are essentially north-south and returned best gold grades up to 2.3g/t [drill hole / intercept].